The Laana-made Type-52 Submachinegun is a very cheap and simple submachinegun, produced by Liberation Industries (state-owned by the Liberated Worlds government). It was originally made underground by the ULF resistance on Laana to arm the guerillas fighting the Machine overlords, but after the Liberation it has been supplanted by better weapons - such as the Type-84 Combat Rifle - and now this simple submachinegun is handed down to militia units and third-echelon troops. Oh, and it is also given to the various insurgent groups around the sector which Laana supports...

(inspiration for this gun came from two RL simple and cheap SMGs - the Sten and the PPS-43).

Here are a few sketches of it by Arthur Pollard:

The Standard Commercial version is the most widely available and commonly encountered. It is produced under license on a variety of worlds, predominately Sicarii and Chemosh. Typical features include high quality finish of all metal surfaces and real wood on the buttplate, rear stock and hand grips.

This variant - the original - was used by United Liberation Front in Laana's highlands during the fight against the Machine overlords. Maintained, repaired or fully rebuilt under pre-industrial conditions, the guns see long service and endure conditions as hard as the men who use them. Typical modifications include a 'browning' finish on all metal parts, simple leather or canvas wraps and laces to replace fancier wood or composite decorations, removal of the trigger guard, and a heavy barrel without the typical cooling shroud. It is not uncommon for the gun to have two magazines laced together for fast insertion of a new magazine during combat.

The Government Pattern is an uncommon variant that is, none the less, occasionally encountered among private security forces or for sale on the civilian market. The original 'Type 52GP' was produced as part of a special order of 1000 improved Type 52 submachine guns for Liberated Worlds Security Forces. While only marginally successful in government service and eventually replaced by other weapons, it continues to be popular in a niche market of private security forces that like the rugged simplicity of the Type 52 and are willing to pay extra for a better quality weapon. Typical features include brushed stainless steel for all metal surfaces and molded synthetics on the buttplate, rear stock and hand grips. The barrel shrouds are replaced with a tactical rail for customizability and some form of quick aim optics are usually fitted to the receiver. An improved trigger assembly with a safety switch complete the upgrades.
Posted by Omer Golan-Joel at 10:33 PM No comments: 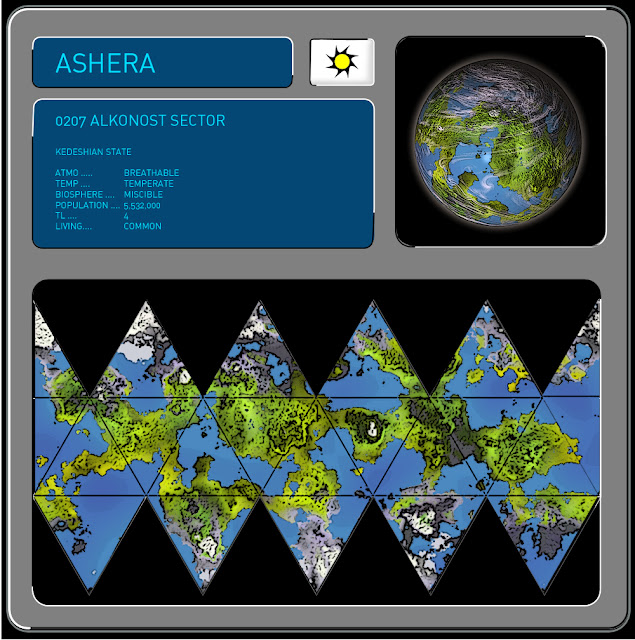 I have decided to resume work on the Alkonost Sector. This will be published, on a periodic basis on the sci-fi RPG eZine/Blog I edit - Infinite Stars.

Stay tuned for more Alkonost goodness here:
http://infinitestarsmagazine.blogspot.co.il/
Posted by Omer Golan-Joel at 11:29 AM No comments:

Here is a rough map of my hypothetical variant on the Traveller Imperium, inspired by a post by Daryen at the Mongoose boards. The idea is to "shrink" the Official Traveller Universe into 3x3 sectors, centered on the Spinward Marches, with most major powers present.


Here is the map: 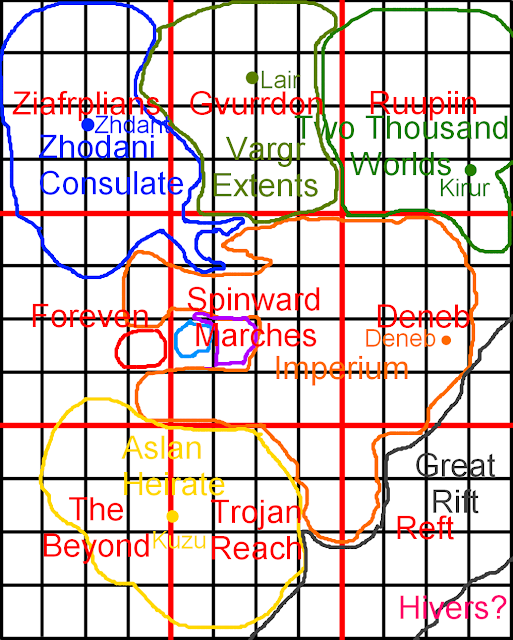 Each major power is about a sector or so in size, enough for a serious campaign but still comprehensible in scale. As Tech Level is TL13 in most places, this means that you can get from Deneb (the Imperial capital) to the Foreven Frontier in 14-15 or so jumps - far enough for a frontier feel yet close enough for interesting political communications.

Now, on to the big question: what is the Imperium? I imagine it as a glorified cartel of the major Merchant Houses (AKA Zaibetsus), a bit similar to the Guild in Dune. The Imperium exists to facilitate commerce, especially by the Merchant Houses, and maintains a starport on most worlds, but does not intervene in local politics, or even small inter-world wars as long as the trade keeps flowing in and out. When a local regime threatens commerce, a trade embargo is usually more intimidating than the power-armoured Imperial Legions, though the latter are always ready to step on any local ruler who challenges the Imperial power. The Imperium allows for smaller traders, of course, but the major lines are owned by the Great Houses. "Nobility" is standing in the Great Houses; a Baron is usually a local Factor at a starport or his or her family; the Emperor is chosen by the Moot composed of the representatives of the Great Houses.

Oh, and no "Grandfather" in this ATU. There were multiple species of Ancients, including (but not limited to) the Droyne, Hivers and Darrians. And maybe also something more Cthulhu-esque. Who knows. But all Humans spread around space, and, eventually, colonized the space beyond the Great Rift, in the little-known days before the Long Night - rather than being transplanted by the Ancients. 299 years ago, the Imperium rose from the ashes of the Long Night and so did the local alien powers (who were also probably affected by whatever has caused the Long Night in the first place.

Most powers - Imperium, Zhodani, K'Kree, Vargr, Aslan - are TL13. The Imperium and Zhodani are mid-late TL13, while the K'Kree, Vargr and Aslan are lower-end Tech-13. The Hivers are TL15 (and sell late-TL13 goods to their trade partners, including the Imperium); the Droyne range from TL0 to TL16; and the Darrians are TL14.
Posted by Omer Golan-Joel at 2:15 PM No comments:

I've updated the starmaps to include Chemosh, scene of intense Kedesh-Laana cold warfare.

Posted by Omer Golan-Joel at 9:15 PM No comments:

I'm thinking about two modifications to the starmap. This is because I'd like to have two thematic adventure locations: a new, backwater colony (think Aliens) and a world with explosive politics caught in the Kedesh-Laana cold war.

The first would be Domovoi - I'll just change its description and make it a brand-new colony (settled in the 3190's). The second would be placed in hex 0307 ("south" of Madmena) and be called Chemosh (pronounced "Kemosh"); it'll be Tech 3 with the Cold War tag.

Pre-History
The primary era of known pre-historic alien habitation of the Alkonost Sector was that of the Precursors, a species of sentient beings who colonized several worlds in the sector in the second millennium BCE. Starting from approximately 1600 BCE, the Precursors built cities and, apparently, starports on Pazuzu, Zariya, Nadezhda and Pigulim; a few lesser structures and artifacts can be found in other star-systems as well.

Most of what is known about the Precursors come from their ruins on Pazuzu, which were studied extensively in the early 2500s. Another source of knowledge, which is somewhat less reliable, is from the Inheritors, who claim to have evolved on the Precursor home-world from local omnivores and thus claim ownership over all Precursor ruins.

From these sources of knowledge, it is known that the Precursors had, at their height, a technological level slightly more advanced than the pre-Scream Terran Mandate, and ruled, for the very least about nine sectors of space at their height. They had a radial symmetry and multiple tentacles which could be used for locomotion or manipulation, breathed an approximately standard atmospheric mix, and had a semi-rigid endoskeleton. Their cities and starships, like their bodies, had a radial symmetry. It is known that they practiced a form of psionics, though the details remain unclear as of yet.

The Precursors brought with them certain organisms of their original ecosystem, creatures which are now common throughout the sector in general and on Precursor worlds in particular.

Around 1200 BCE, the Precursors were wiped out within a single decade. While the evidence are inconclusive about the exact cause of their extinction, it is clear that their end was a horridly violent one, be that an invasion by another alien species or a particularly nasty civil war. Some of their structures are still radioactive to this day due to dirty weapons employed by one side in that conflict.

Once the Precursors were gone, there is little evidence for any sentient settlement of the Alkonost Sector... Until the Humans came, almost a millennium ago.
Posted by Omer Golan-Joel at 12:52 PM No comments: